This website offers categorized collections of hundreds of web links to other websites about the El Morro Valley Area.  Many websites and web pages are continually changing their web addresses or completely disappearing from the web. This causes a broken link that leads to a "dead end" or to a completely different website that has subsequently assumed that web address. The weblinks on this website are updated infrequently, so you may encounter numerous broken links.   We apologize for this inconvenience. 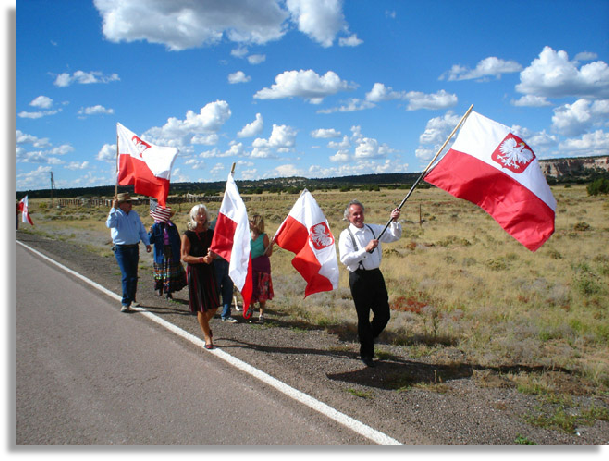 Almost never will you see a dinky little parade marching down lonely Highway 53 out in the middle of the desert, with the marchers waving 5 huge red & white Polish  and a US flag in the wind, the women dressed as happy Polish peasant maidens, and everyone smiling and waving profusely at the occasional bewildered motorist driving by (thinking what the hell was that?)  It may have been one of the most peculiar & perplexing spectacles to pass along the Ancient Way in El Morro Valley, since a US Army Caravan of 25 Camels passed this way in 1859.

The First Annual (and only) Pulaski Day Parade on Sunday October 3, 2010, was a RAVING SUCCESS. Even though the entire valley community was invited, there was a marvelous turnout of 11 enthusiastic marchers, including one faithful ranch dog. There was also an auto SUV "Float" carrying a would-be marcher with an injured leg, who honked and cheered the parade jubilantly onward. The parade marched 0.4 miles along the north shoulder of Highway 53 from Belly Button Road (also known as the El Morro Strip) westward to Kestrel Road, there flipping a U-ey and marching back along the southern shoulder to the starting point.  At times the parade stretched for a quarter mile, as seen in the right hand photo.  Marchers came from the four corners of the earth, as far away as the Philippines, Costa Rica, Ethiopia, Alaska, China, Madagascar, Singapore, Borneo & Albuquerque  to attend this momentous parade.  * See footnote 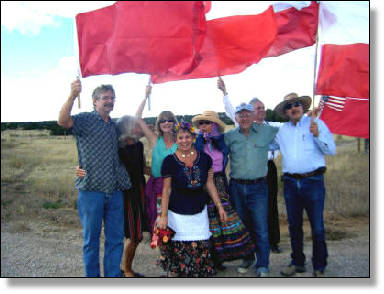 r, local attorney Will Stripp described the 1st Annual El Morro Valley Pulaski Day Parade thusly, "When I was a wee kielbasa, I used to march in the Pulaski Day Parade in Manhattan.  In New York City, Pulaski Day is celebrated on the first Sunday of October. This year is the 73rd Pulaski Day parade.  Casimir Pulaski was a Polish nobleman who was appointed by George Washington as a general over a Calvary brigade during the Revolutionary War. He used some of his own money to fund his troops. He was killed in 1779 during a charge at the battle of Savannah. Congress named  October 11, his date of death, as Pulaski Day. President Obama recently made him an honorary citizen.

To honor General Pulaski, on Sunday October 3, 2010, I am going to have a small parade beginning at 3:00 p.m.... Anyone who wants to participate in the parade is welcome. Then there will be a potluck and polka party beginning at roughly 4:00 p.m. and ending around 7:00 p.m. I have an accordionist coming in from Albuquerque to play polka music. We will provide kielbasa & cabbage to eat & maybe some polish cookies

As Will described, the jolly entourage of marchers loaded in their aut 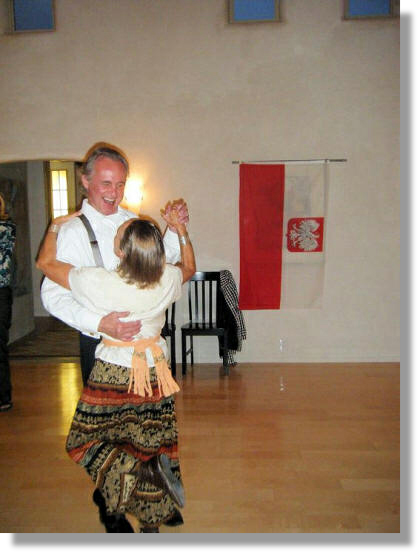 omobiles and headed down a long dirt trail to the Belly Button Ballroom for the 1st Annual Pulaski Day Polka Party. The marchers were joined there by more friends and neighbors who were too shy, scared or embarrassed to march in the Parade. The talented accordionist energized the crowd with good ole Polka tunes such as The Beer barrel Polka and the Wiener Dog Polka.  The smiling, laughing polka dancers whirled and twirled around the ballroom floor, frolicking in the festive Polka Party atmosphere, reminiscent of the good old bygone days of "The Lawrence Welk Show".  The polka dancing maidens outnumbered the polka dancing fellas 2 to 1, so there may be call for a Polka Workshop at the Old School Gallery in the coming year. Stay tuned. 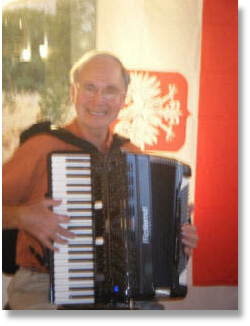 A delicious potluck buffet of cabbage, potato, beef and kielbasa dishes and delectable deserts was enjoyed by all. To top off the feast and festivities, there was a brief refreshing rain shower followed by a magnificent full arch, double rainbow, and golden sunset... that really Ooow'ed and Ahhh'ed the crowd.  A one, and a two, and a three.. Roll out the barrel.. We'll have a barrel of Fun!! ..And Everyone sure did!

Next year's 2nd Annual Pulaski Day Parade promises to be even bigger and better, with drummers a drumming, pipers a piping, and more marchers a marching across the remote desert, in honor & celebration of a Polish American War Hero "Casimir Pulaski". We'll see you next October 2nd, 2011 (be sure to mark your calendars) at the turn off to Belly Button Drive for the 2nd Annual Pulaski Day Parade & Polka Party. 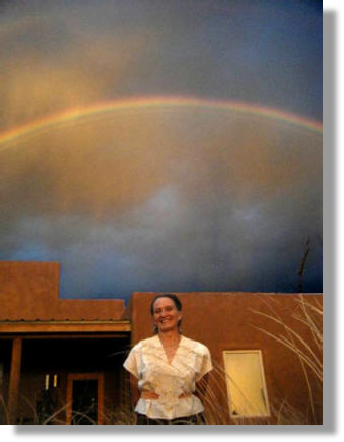 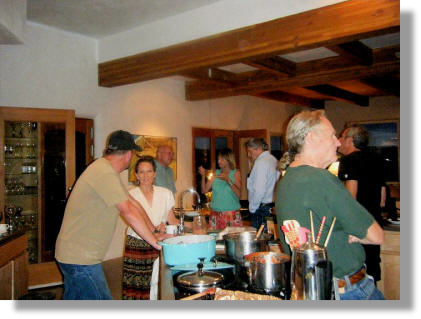 * some of the marchers returned to the USA from these faraway places at sometime during their lives and eventually ended up at this parade.